I will be posting over the next few days video diaries of my chase logs for May 8,9,10th...stay tuned.  However, I just wanted to upload this and share the video footage taken from the dome cam during its first real run during a severe weather event.  It came out wonderful and better than I expected.  Better yet, here are the highlights.

So here we are in the middle of March with the longest tornado-less track record in history for the entire United States. Many chasers including myself were beginning to wonder if there was going to be any storms soon to chase. The weather gods finally answered our prayers when the Storm Prediction Center issued a hint in the change of weather patterns across the US in their 4-8 day outlook.

DISCUSSION... ECMWF/GFS CONTINUE TO SUGGEST A STRONG SHORT-WAVE TROUGH WILL EJECT ACROSS THE NRN/CNTRL ROCKIES INTO THE CNTRL PLAINS/MID MS VALLEY DURING THE DAY4 PERIOD. GFS IS STRONGER WITH ITS SPEED MAX APPROACHING 100KT AS IT TRANSLATES ACROSS NRN KS INTO NRN MO BY 25/00Z. THIS STRONGER SOLUTION FORCES A DEEPER SFC LOW OVER IA BY PEAK HEATING WHILE ECMWF IS SOMEWHAT WEAKER WITH LOW OVER MO. REGARDLESS...IT APPEARS SUFFICIENT MOISTURE MAY RETURN ACROSS THE WARM SECTOR FOR A THREAT OF DEEP CONVECTION WITHIN A STRONGLY SHEARED ENVIRONMENT. WHILE STRONGEST FORCING WILL BE FOCUSED ACROSS IA/NRN MO...A FEW STORMS MAY DEVELOP SWD ALONG FRONTAL ZONE INTO NERN OK WHERE HEATING/INSTABILITY WILL BE SOMEWHAT GREATER. 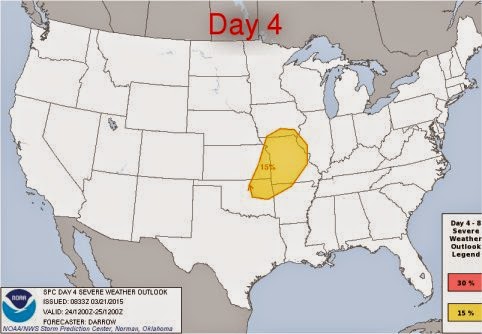 Ok, so my interest is now peaked along with hundreds of other chasers following a day of disappointment on Tuesday March 24 with the forecast of a strong cold front sweeping down over the plains. On Tuesday night, I read the latest outlook and found myself seeing this would be a great kick off to the season. The hint of tornadoes was possible and I couldn't resist.
DAY 2 CONVECTIVE OUTLOOK


THERE IS AN ENH RISK OF SVR TSTMS ACROSS PARTS OF EXTREME NORTH TX...OK AND FAR NW AR... ...SUMMARY... SEVERE THUNDERSTORMS ARE EXPECTED TO DEVELOP ALONG A COLD FRONT STRETCHING FROM PARTS OF THE MID MISSISSIPPI VALLEY WEST SOUTHWESTWARD INTO PARTS OF THE SOUTHERN PLAINS ON WEDNESDAY AFTERNOON AND EVENING. LARGE HAIL AND DAMAGING WINDS SHOULD BE THE PRIMARY THREATS. ...SRN PLAINS... A POSITIVELY-TILTED UPPER-LEVEL TROUGH WILL MOVE INTO THE SRN ROCKIES AND CNTRL HIGH PLAINS ON WEDNESDAY AS A COLD FRONT ADVANCES SWD ACROSS THE CNTRL AND SRN PLAINS. THE AIRMASS AHEAD OF THE FRONT IS FORECAST TO BECOME MODERATELY UNSTABLE DURING THE DAY AS A CAPPING INVERSION WEAKENS BY AFTERNOON. THESE FACTORS COMBINED WITH INCREASING LOW-LEVEL CONVERGENCE WILL RESULT IN SFC-BASED THUNDERSTORM DEVELOPMENT ALONG THE BOUNDARY IN THE LATE AFTERNOON. SEVERAL CONVECTIVE CLUSTERS SHOULD ORGANIZE LATE WEDNESDAY AFTERNOON WITH MCS DEVELOPMENT POSSIBLE ACROSS THE REGION DURING THE EARLY EVENING. NAM FORECAST SOUNDINGS NEAR THE STRONGEST INSTABILITY AT 21Z WEDNESDAY FOR TULSA AND OKLAHOMA CITY SWD TO NEAR THE RED RIVER SHOW SFC DEWPOINTS FROM 60 TO 65 F WITH MLCAPE VALUES IN THE 2500 TO 3500 J/KG RANGE. THIS COMBINED WITH 0-6 KM SHEAR OF 45 TO 50 KT AND 850 TO 500 MB LAPSE RATES NEAR 8.5 C/KM SHOULD BE FAVORABLE FOR SUPERCELLS WITH LARGE HAIL. CELLS THAT ARE DISCRETE EARLY IN THE EVENT AND COINCIDE WITH MAXIMIZED INSTABILITY MAY PRODUCE HAILSTONES OF GREATER THAN 2 INCHES IN DIAMETER. THE AMOUNT OF INSTABILITY COMBINED WITH VERY STEEP LOW-LEVEL LAPSE RATES WILL ALSO MAKE WIND DAMAGE LIKELY WITH THE STRONGER CELLS. A TORNADO OR TWO CAN NOT BE RULED OUT ESPECIALLY IF CELLS CAN BECOME ENHANCED BY MESOSCALE INFLUENCES SUCH AS AN OUTFLOW BOUNDARY. HOWEVER...THE COLD FRONT IS EXPECTED TO UNDERCUT THE CONVECTION AS STORM COVERAGE INCREASES IN THE LATE AFTERNOON WHICH SHOULD MITIGATE THE TORNADO THREAT AS THE EVENT UNFOLDS. ALTHOUGH SEVERE STORMS WILL ALSO BE POSSIBLE ACROSS NCNTRL AND WCNTRL TX...A CAPPING INVERSION SHOULD MAKE CONVECTIVE DEVELOPMENT MORE ISOLATED WITH SWWD EXTENT.

So in a nutshell, hail was a for sure and tornadoes, a big maybe. Then I saw this...


Ok, I'll bite.
So here we are, Wednesday March 25th. I woke to a headache and checked the models to make sure nothing disappeared overnight. Well, surprise, surprise, the Marginal chase day was moved up to Enhanced. Excellent, but I was concerned about the amount of moisture available. Would they climb?? 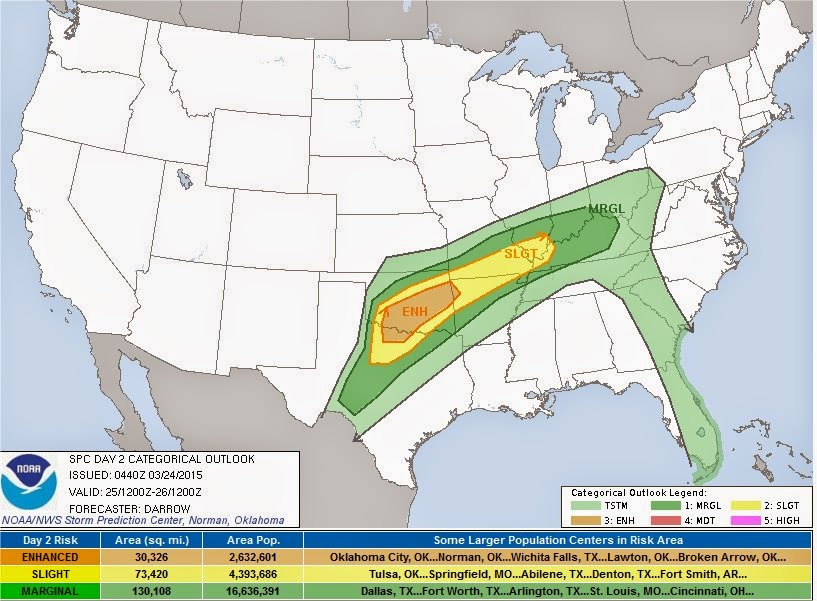 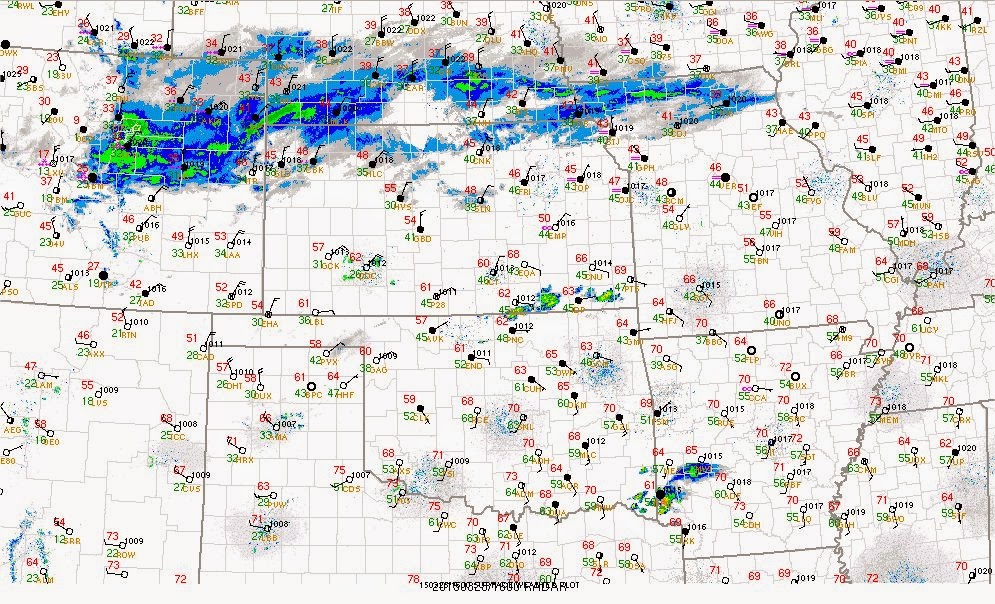 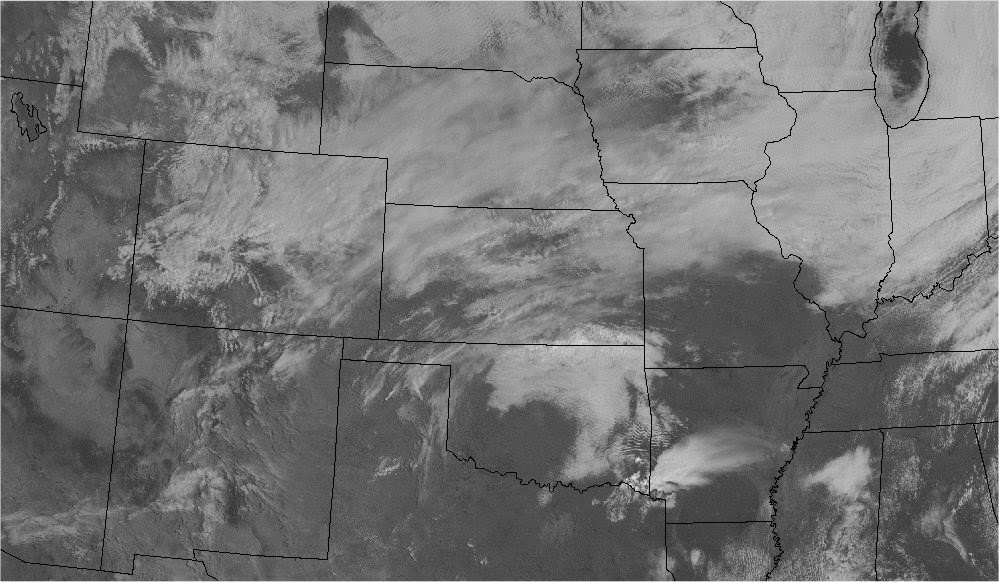 By 12pm, it was time to make the decision based on the amount of cloud cover and lack of dew points to consider.  I had a strong feeling that the clouds would break and decided to pack up the Envoy and head out.  One of the hardest choices for me to make was, do I take a chance at loading up the roof cam or not?  After verifying the profiles of hail sizes to be expected, I didn't want to risk it. By twelve thirty, I was on the road and set my target for Sand Springs as a starting point.  The sun tried for a while to break out and finally it did after I reached my destination and stopped off at the local IHOP for lunch.  From my window seat, I could see the sun was burning off the morning fog and blue skies were on tap. 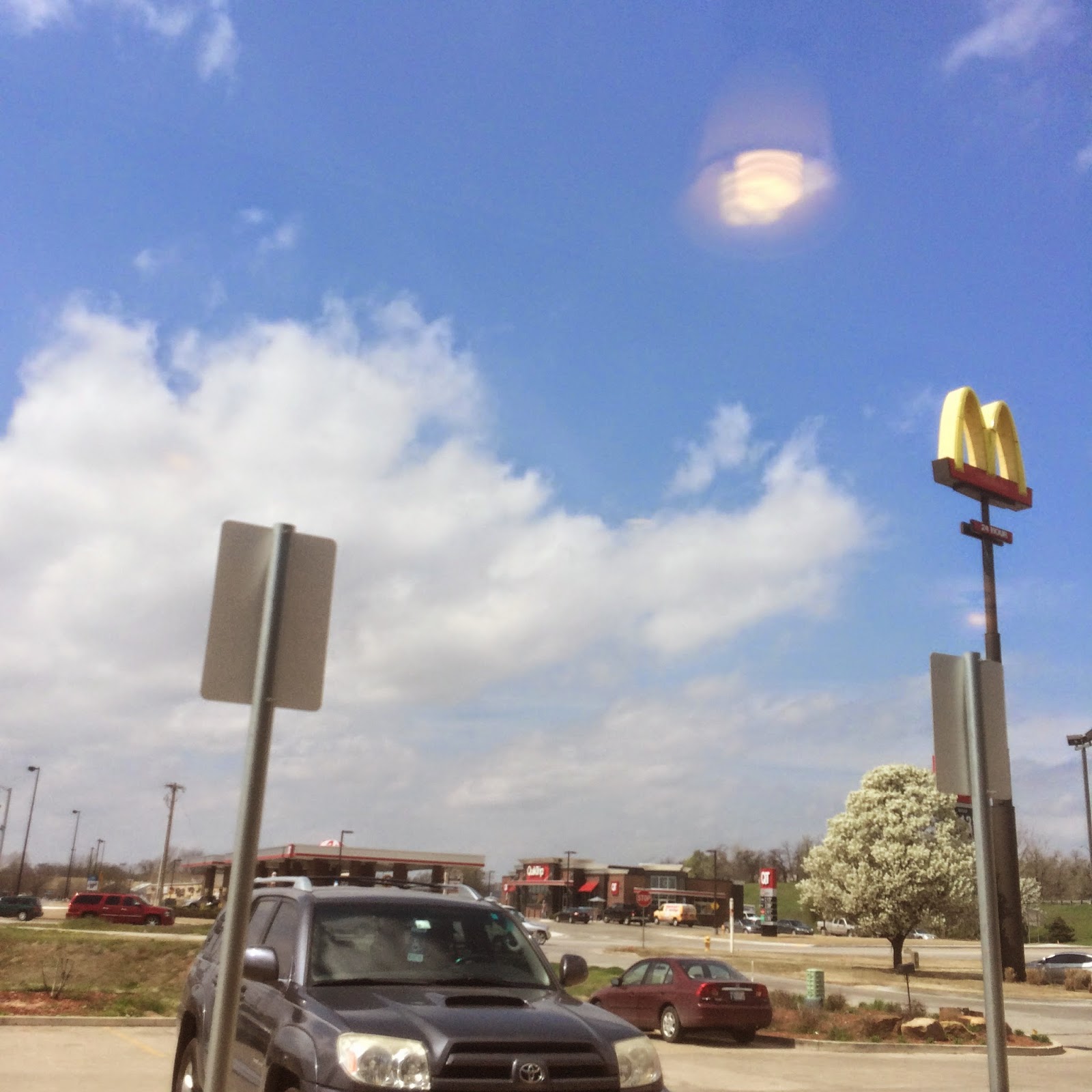 I began communicating with one of my chaser buddies from the station, Fred Williams who was located in Cleveland, just to my west.  I decided until the action began, to pay him a visit.  From the top of the hill where he was situated, it gave a great vantage point to all points North, West and South.  We chatted for a while while continuing to watch the radar.  Cells were already beginning to fire along the Kansas/ Oklahoma border, so I began having second thoughts if I should move a little more to the north towards Pawhuska. 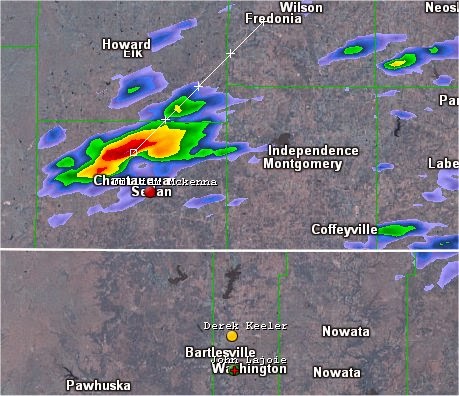 Saying goodby to Fred, I headed north but kept an eye to my southwest where a new cell was beginning to develop.   Then I remembered an image the Tulsa NWS had posted earlier that morning. 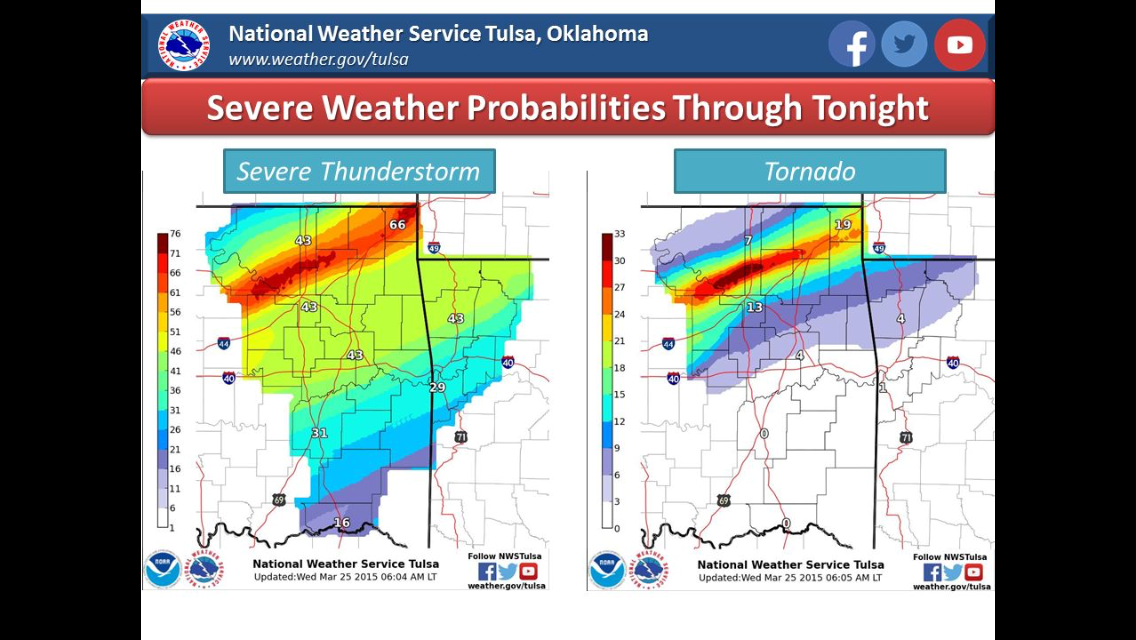 Checking the latest dew points, the numbers had changed for the better, not to mention the newly posted thunderstorm watch box.. 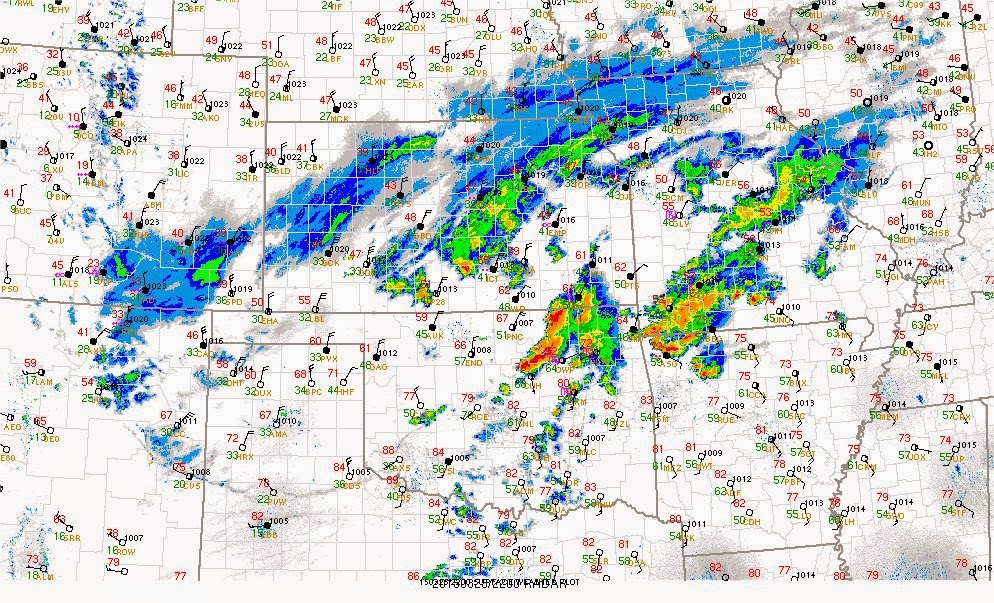 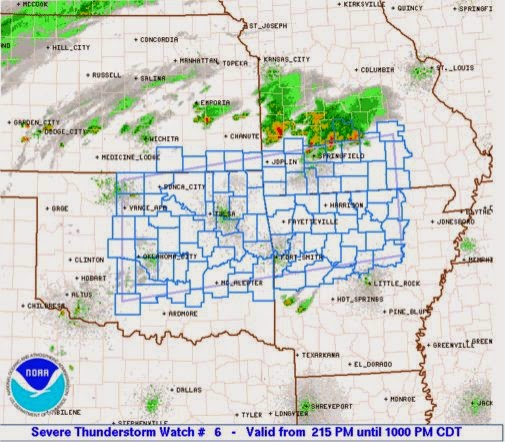 There was no need to shoot north, so I decided to turn back around and head south.  By this time, the cell entering the Cleveland area was really taking off. 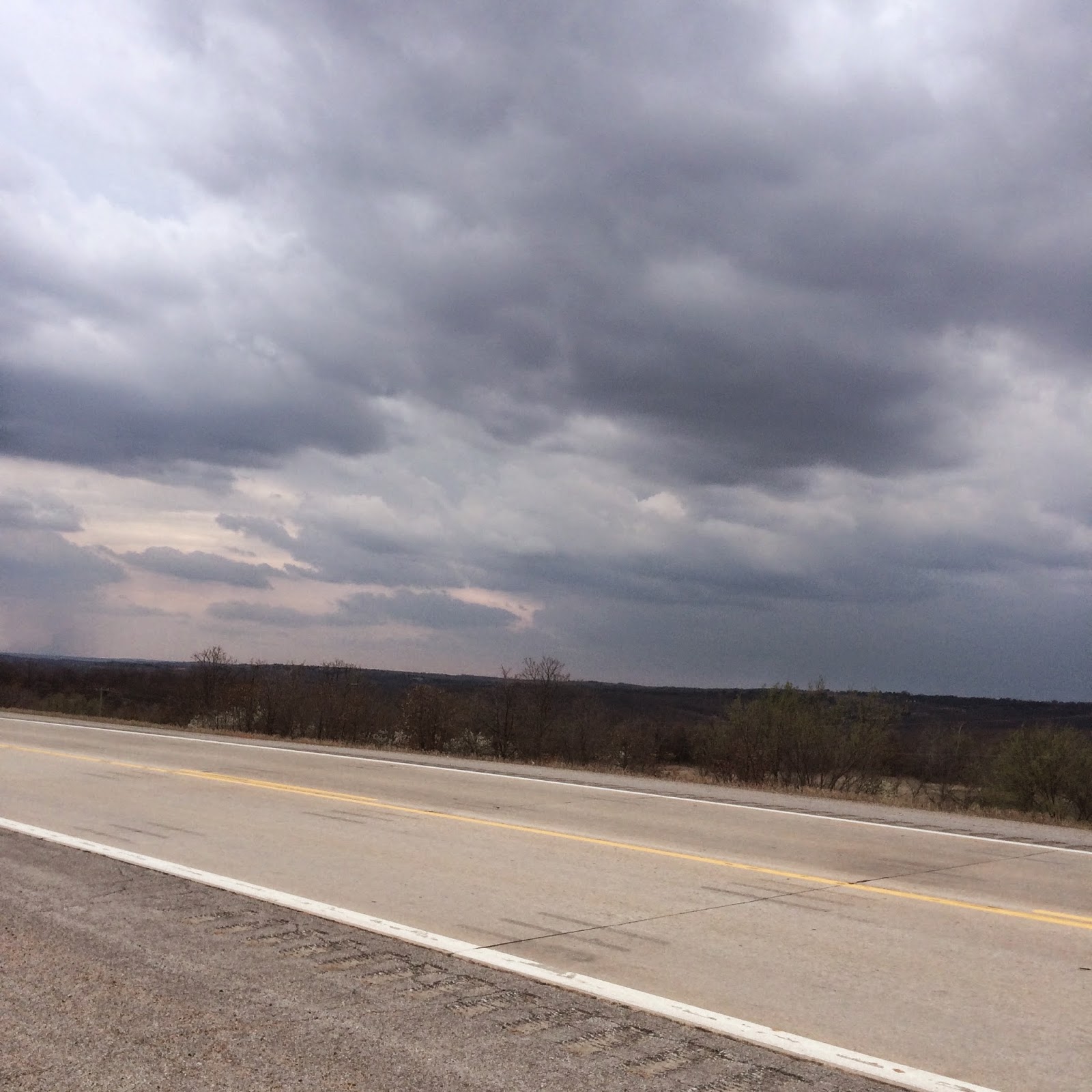 Reporting to KTUL television station my location, I was advised to sit tight due to 2 inch hail in the area.  Oh really, I remember thinking.  All I could see was pea size and heavy rain obscuring my view.  Anyways, I sat for a few minutes watching the radar and decided to continue south towards highway 412 watching this cell with an impressive view from the east. Compared to the image about taken only 15 minutes prior, this cell was going to throw down some mean hail. 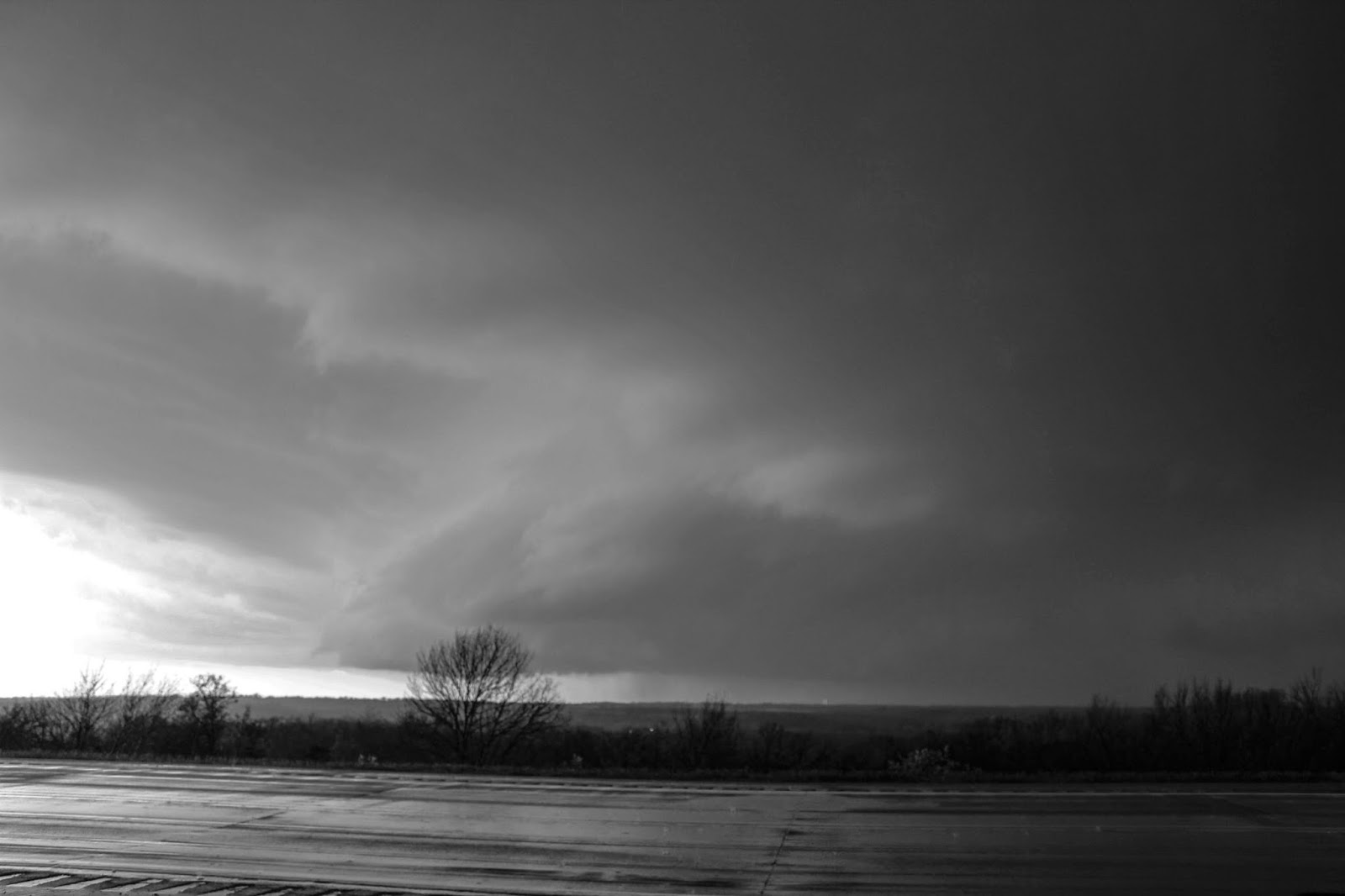 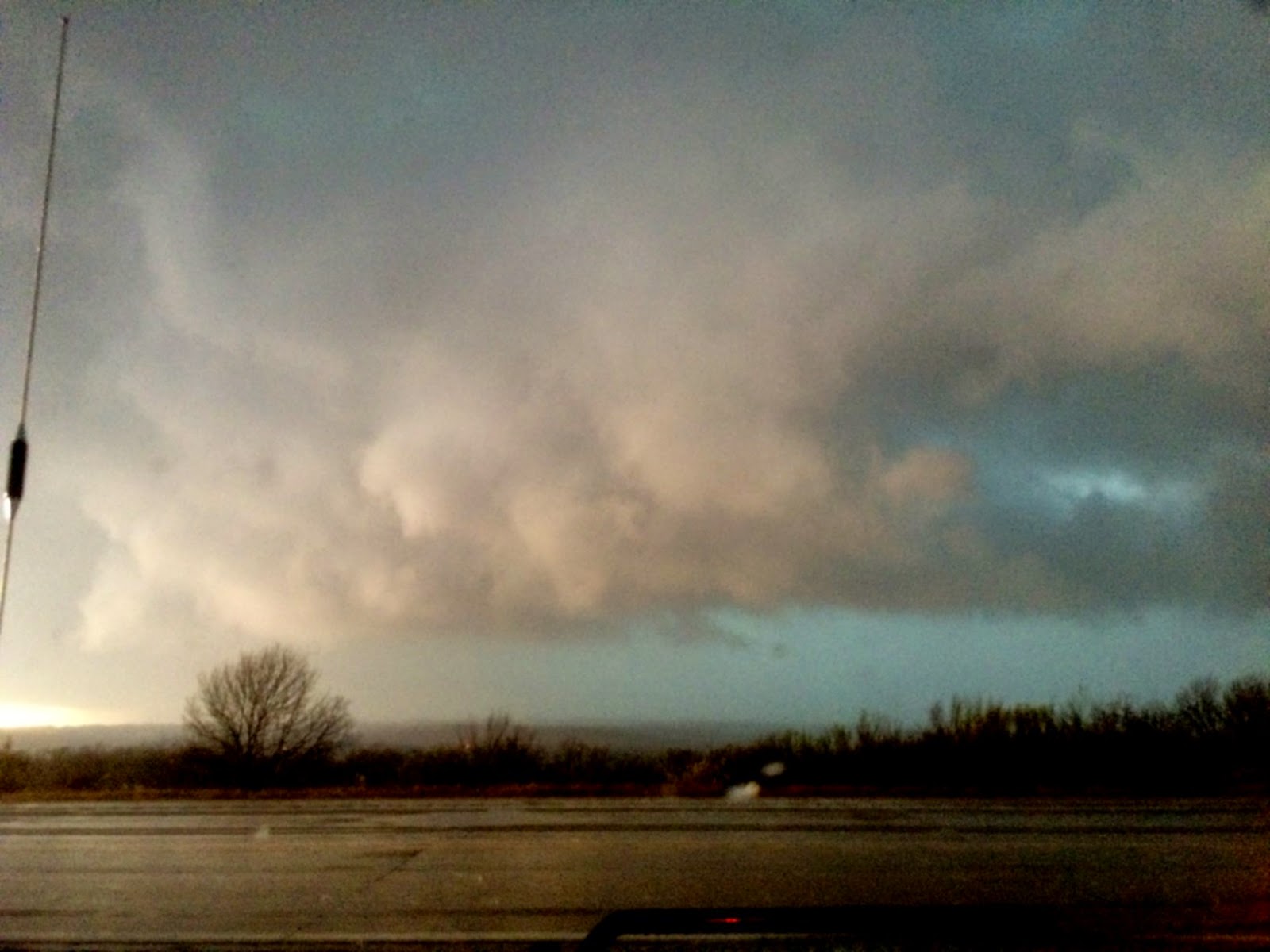 All the while as I watched the cell to the south begin to get its act together, a second cell to my north started laying down some pretty mean hail up to 2 1/2 inches. Ok, it was now time to continue for highway 412 and put some distance between me and the hail shaft. 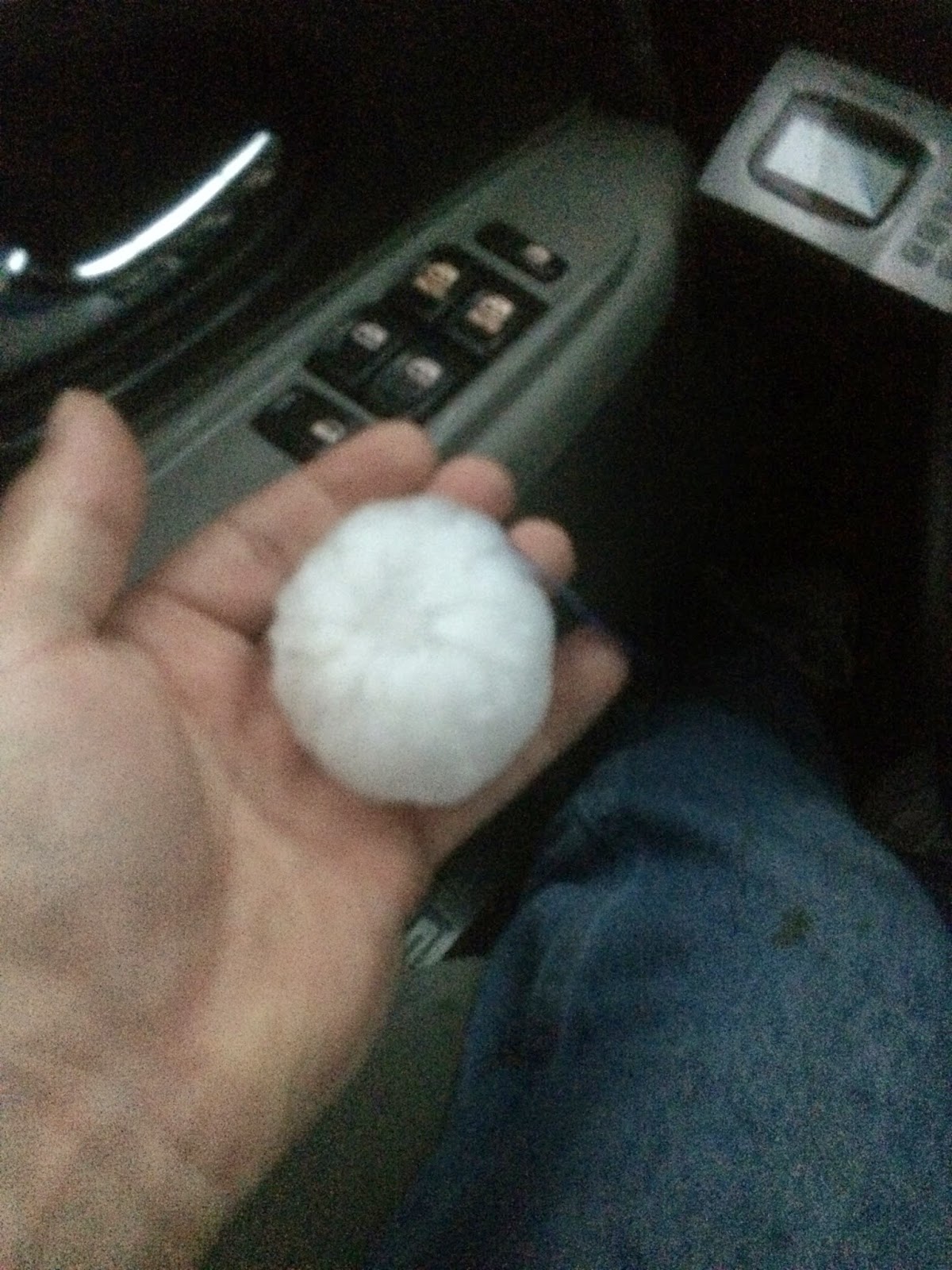 By the time I was back on highway 412 heading back towards Tulsa, the southern cell that I was on was given a tornado warning due to a report coming from Keystone Lake just a few miles down the road ahead of me. In pursuit, I pushed through the rain until breaking into the clear to see the Tornado ahead of me crossing the road as I continued to stream live to the TV station. Pulling off to the side of the highway, the view was amazing. 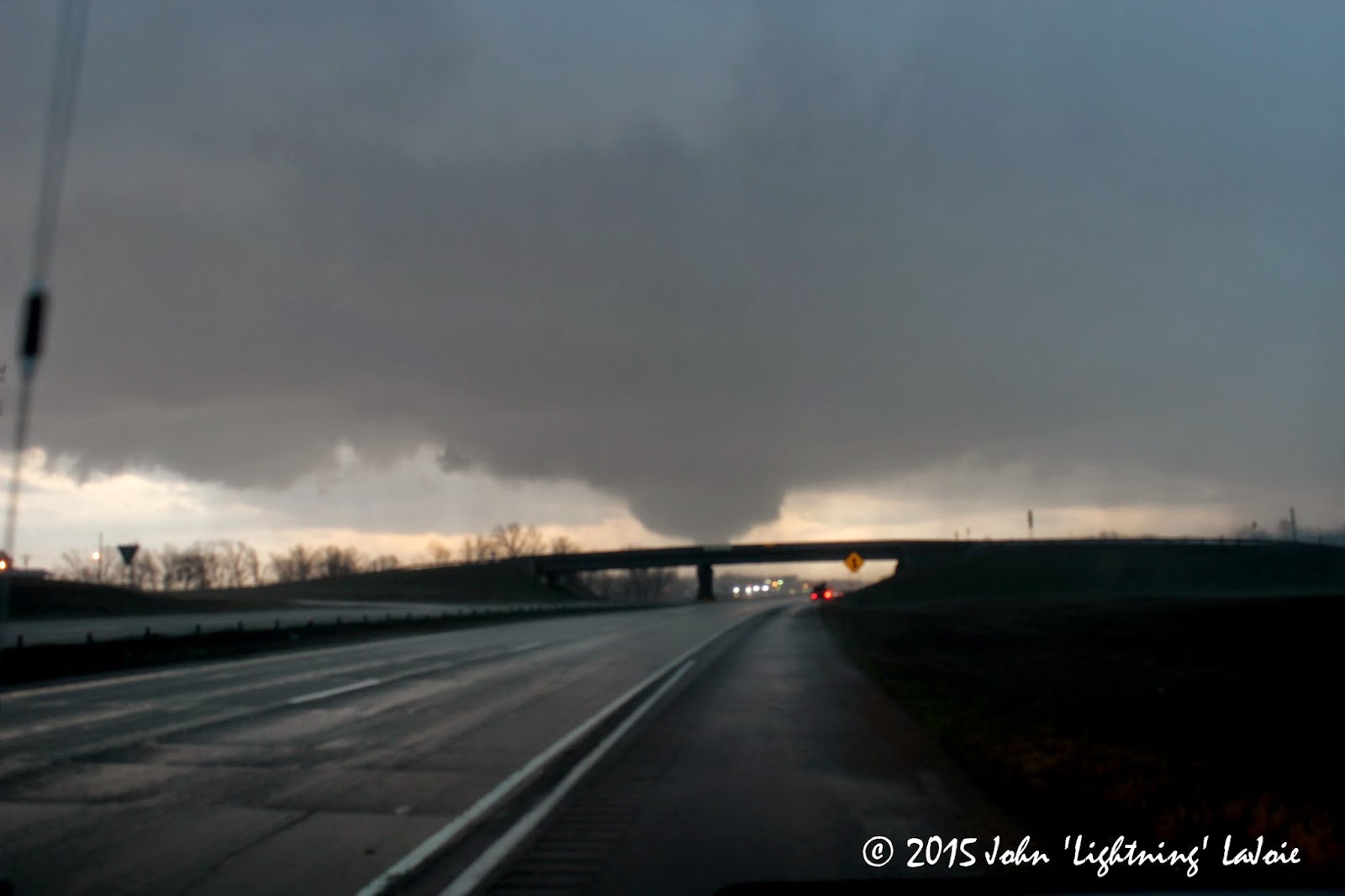 Below is the approximate GPS logging of my location (Little Black X) on the base reflectivity scan of the storm at 5:40pm. 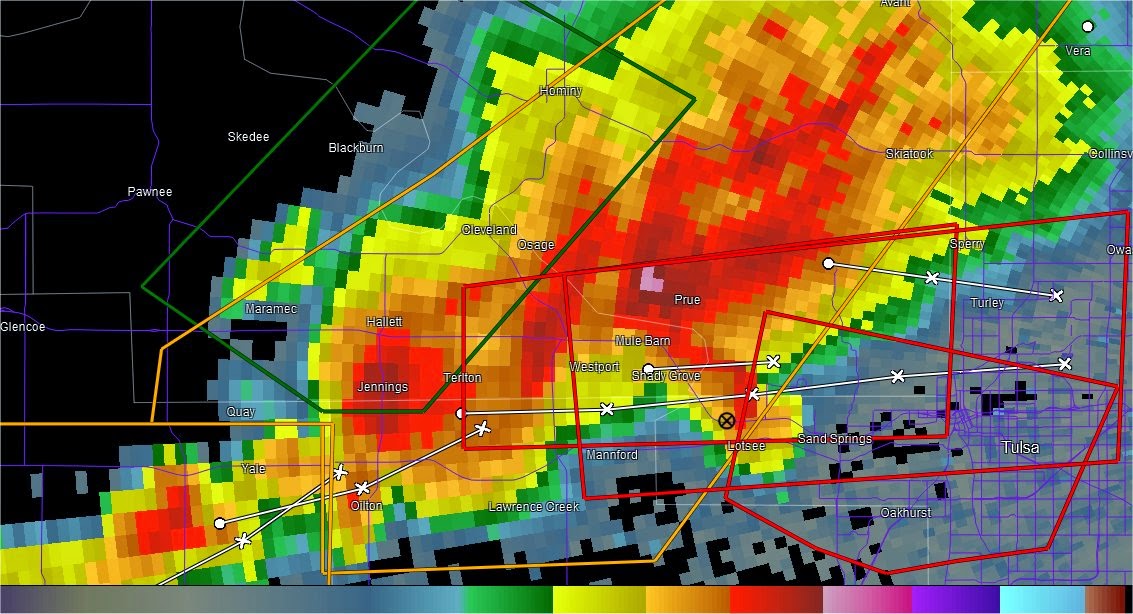 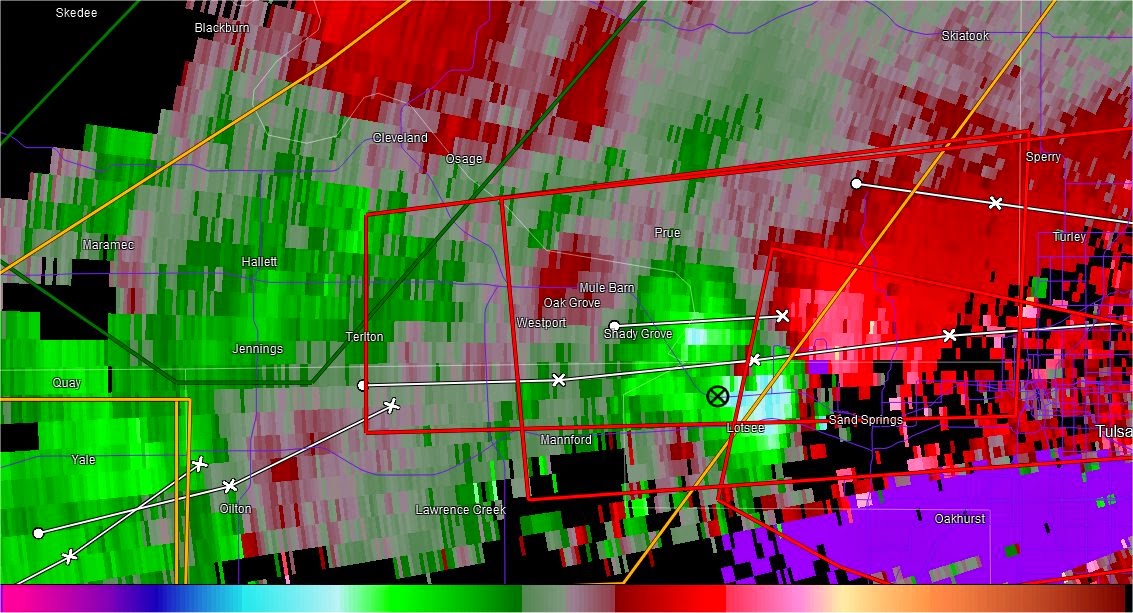 As you can see, I was pretty close to the tornado after I decided to move under the bridge seen here in the video to avoid the hail shaft coming out of the west.
After the Tornado passed over the road taking out a mobile home park, I followed the cell as it continued towards Sand Springs and lifted just before entering town. Pressing on, I followed the cell as it continued to churn its way towards Tulsa and all I could think about was, would it drop again. I needed to get off this road and head a bit north onto 75 and switch back east on highway 11 near the Tulsa International Airport where I could continue tracking this dangerous storm. 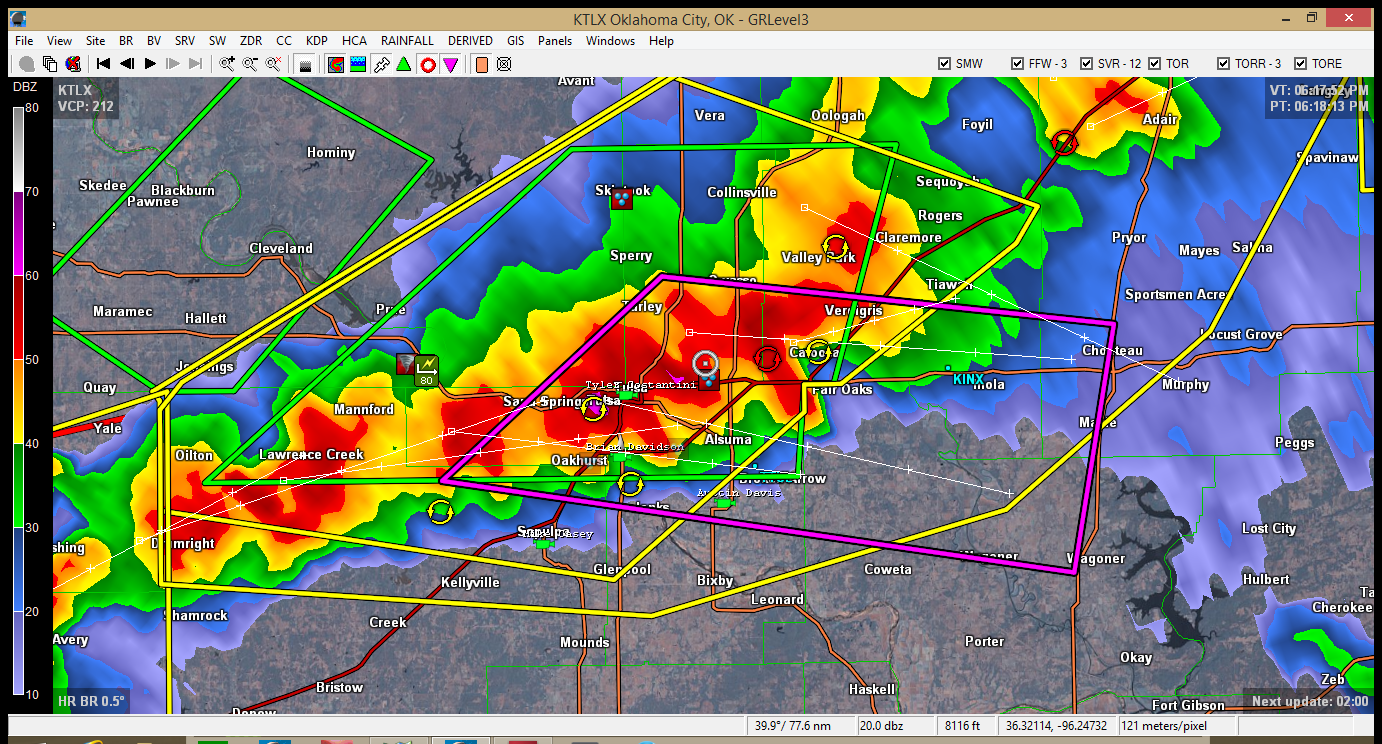 Closer to Tulsa, the visibility was turning for the worst, not to mention the amount of Traffic along the way.  Power flashes were seen along I-244 until i reached an area near the airport to get a better view of the second area of rotation spinning over the city.  The rain was coming down in sheets, so the image was effected as well. Deciding with the conditions, I decided to head home for the day. 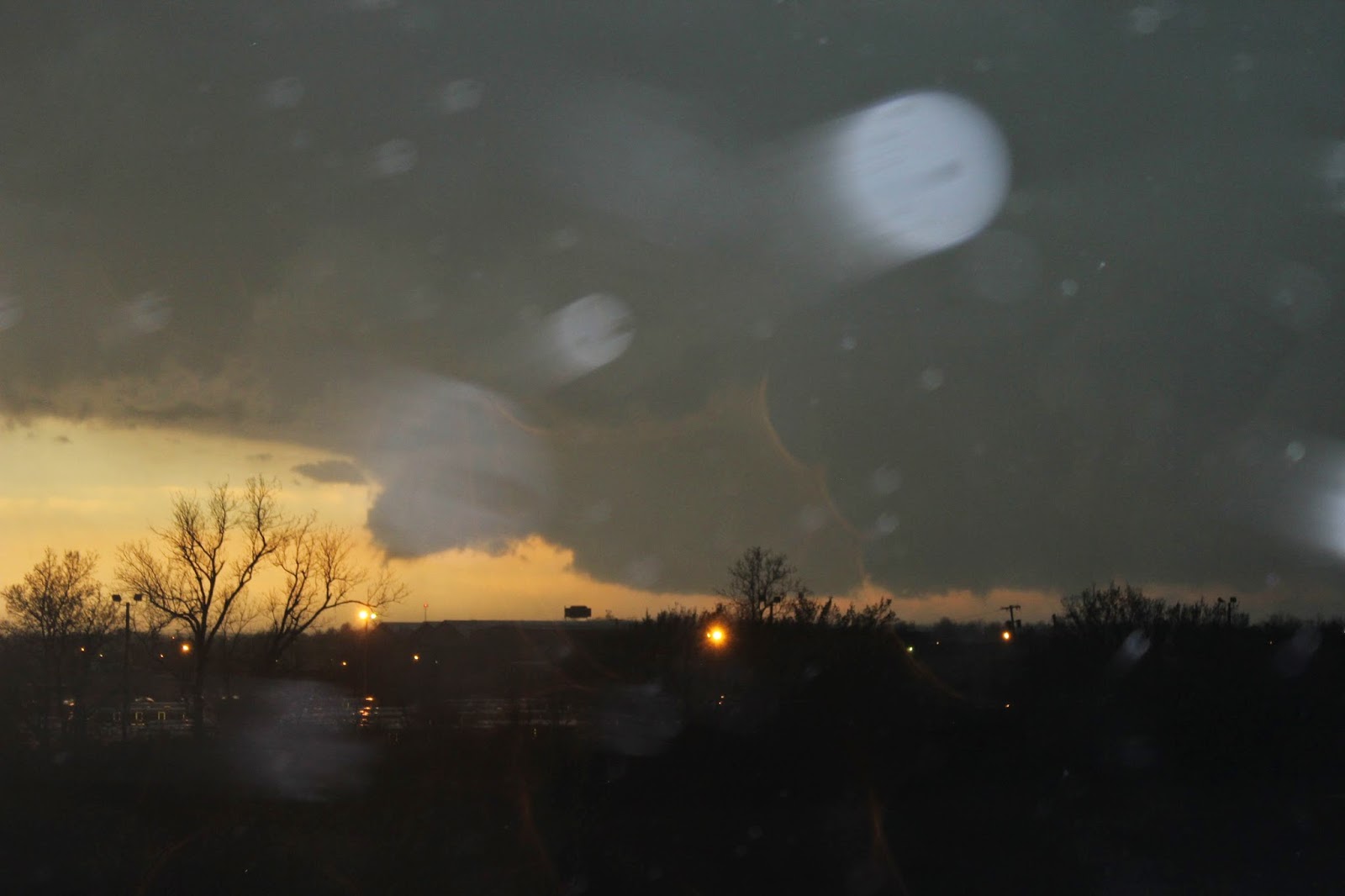 Severe thunderstorms developed late in the afternoon on March 25, 2015 near a warm front that had surged north into northeast Oklahoma and northwest Arkansas. With a highly sheared and unstable air mass in place across the area, discrete supercells were able to develop near the warm front late in the afternoon and into the early evening hours. Several tornadoes were spawned from the supercells from west of Tulsa into northwest Arkansas. As the evening wore on, a cold front surged into the area from the northwest and thunderstorms congealed into a line along the cold front marching to the south and east during the evening and overnight hours. Many of the storms became severe producing large hail and damaging winds before exiting southeast Oklahoma and west-central Arkansas.


The tornado developed over Keystone Lake in Osage County, and moved ESE across Highway 412 near the bridge. It damaged ranch style homes, barns, and a church on 209th West Ave. The tornado traveled SE damaging several more homes on 193rd West Ave and crossed Highway 412 where it blew over a semi tractor trailer. Large utility poles were snapped south of Highway 412, and a doughnut business was destroyed at 177th West Ave. The tornado continued SE across the Arkansas River, then moved eastward across River Oaks Estates mobile home park where numerous homes were destroyed, resulting in one fatality and 30 injuries. The tornado then crossed the river again, as it headed toward Sand Springs where it dissipated just before reaching Highway 97. Numerous trees were snapped and uprooted along the path, and many power poles were also snapped. 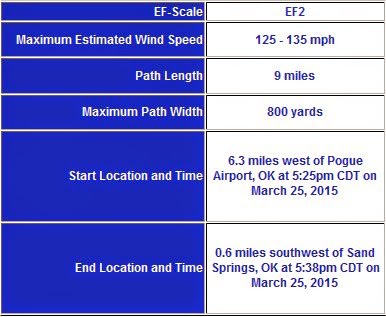 Spring is in the air

With warmer temperatures on tap, I couldn't resist getting out additions to the Envoy using Driveway Graphics to customize a new windshield decal sporting our station KTUL. 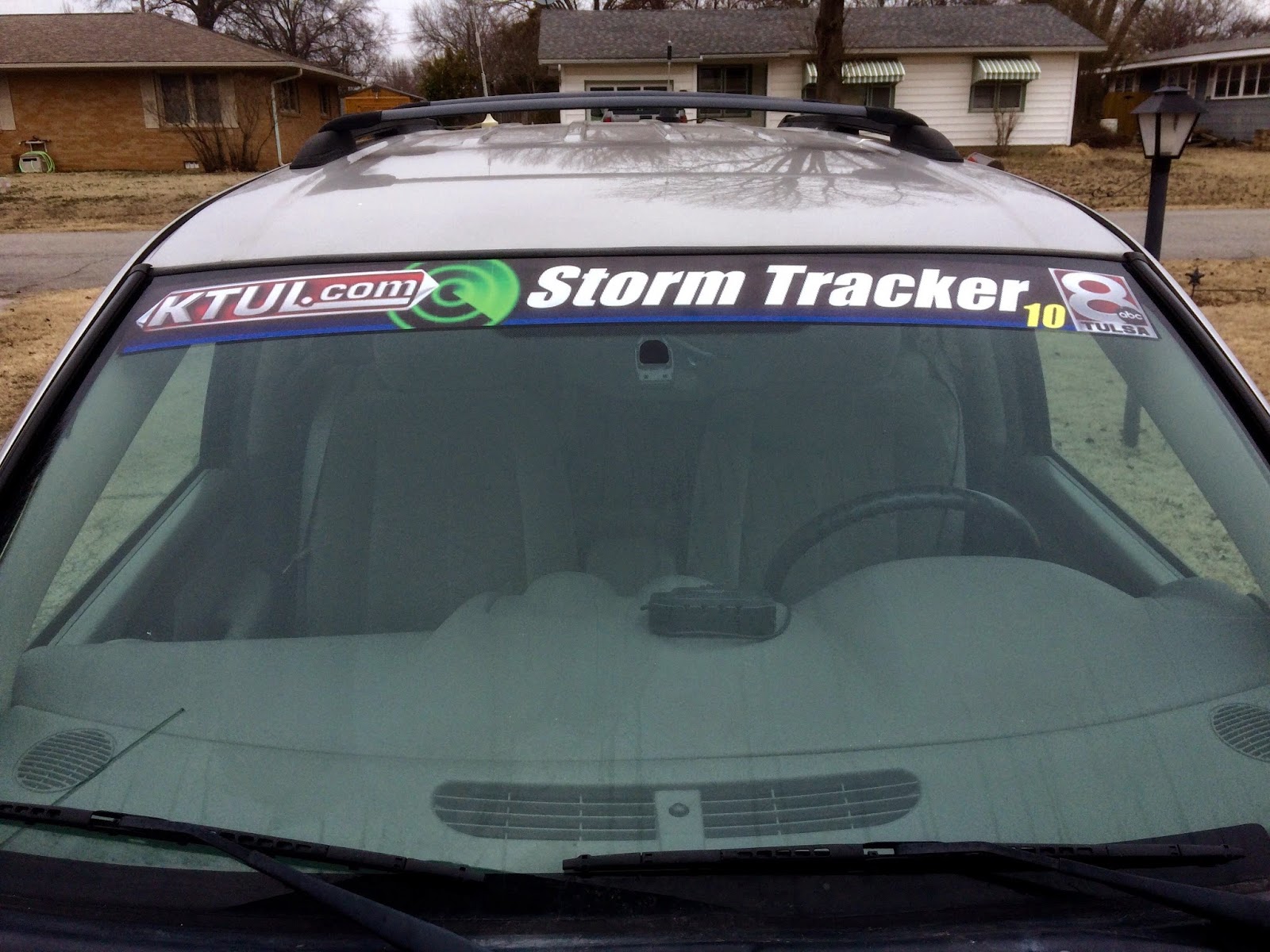 Live Storm Chase stream set to begin the moment were operational in the field Check out our live feed on KTUL News 8 in Tulsa and twitter and facebook updates to when we will be streaming.

Where you've seen me on..

Weather Informational sites I use...